After several days of searching through 15th century Dutch painters, I think I found what I am looking for. 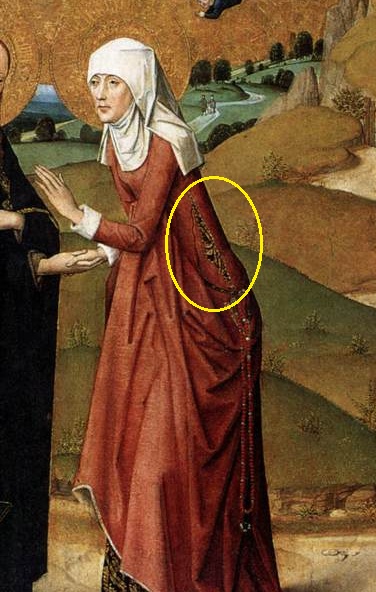 Visitation – 1463
Master of the Life of the Virgin

I was so excited last night when I found the picture. I just sat and stared at it for several minutes with glee. But then today I actually read the title: The Visitation. That refers, again, to the point in the Bible when Elizabeth visits Mary, both of whom are pregnant.

Perhaps it’s time to throw in the towel and just admit that an un-waisted side-laced 15th century cotte was mainly used as a maternity dress. In another 500 years, when some futuristic SCA group is re-creating the 21st century, it would look pretty silly for the non-pregnant women to be wandering around in maternity wear. So until I find more evidence, either it’s a side-laced cotte with a waist-line or, if I want no waist-line,  it’s a front-laced cotte.

So what do I have so far?

15th century Flemish cottes could be either laced in the front or the sides, with the former being more common than the latter. But in my own interest, let’s start with the side-laced version. I have not been able to find many articles or writings on the side-laced kirtle, so hopefully what I’ve gathered will help others.

This is a great example of the side-laced cotehardie. In this painting you can see:

If you look at the skirt edge, the gown is lined with a green fabric all the way down to the hem. 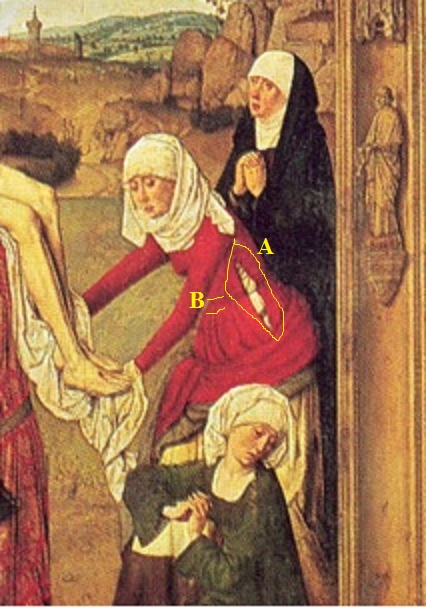 Since Mary Magdalene is wearing the dress, I’m assuming that she’s not pregnant.

If you look at the rolled up hem, the gown is lined with a grey fabric.

This one is, of course, the pregnant Elizabeth.

I have a few more iffy pictures that could be side-laced, but, until I get versions of them with better resolution, I’m not willing to assume that they are side-laced.

Translate To A Different Language

My Posts by Date

Tags in My Posts

My Most Recent Posts

An accounting of the medieval journey of the de Huntington family.

Turning Over a New Leaf

I have created this blog to share my interest in all forms of stitching, quilting, sewing, knitting, medieval re-enactment and costume making - particularly my love of historical embroidery. I also love travelling,especially when it also involves any of my other interests.

My documentation and research of sewing projects and historical garb creations

Society for Creative Anachronism Every Day of Your Life!

It's All About The Dresses!

Even if it's just sew-sew.

meanderings through the 15th century

all my needle and thread projects