I’ve felt run down for the last few days, but I was hoping it was just a low iron week. I added my vitamins back to my daily regimen in hopes that would I feel better, but I’m still tired. This morning I woke up coughing. At least with the vitamin increase, I should be able to fight off this bad boy a bit faster than normal. I’ll just cure it with some hot toddies. Ooo, and I have a grog mix I’ve been wanting to try.  I do have to run out to get the Thanksgiving turkey today, but after than it’s bed for me.

The realization that I will not get done with my blackwork Elizabethan coif in time to enter it into Christmas Revel’s A&S has hit me. Counted stitch blackwork is very, very slow. I’m not even half done with my needle-case cover, and all I’ve done on the coif is planned and sketched it.

So, I spent part of last night looking through the documentation I’ve gathered for projects that I haven’t yet made, and I decided on the pleat-work embroidered apron.  Since my next non-A&S compliant project is the side-laced cotte (I’m just going to  machine-sew it), I want something to bling it up. Not much jewelry was worn in the age of cotehardies. By the time they introduced waist-lines, even the girdle was not tremendously popular. However, in a few manuscripts and woodcut prints you see a very fancy apron.

It’s white, although I have seen a couple of other colors, and it’s most probably linen.  Along the top, normally gathered edge, you see pleat-work, sometimes plain and sometimes with embroidery on top of it. It looks very much like smocking in some of the pictures. I’ve never done smocking (I’m a virgin smocker), but it looks suspiciously like cartridge pleats – rows of evenly spaced gathering stitches.

This apron is seen from the early  14th to the mid 16th centuries. So I can wear it with my cotes or my late period Flemish garb, which makes it a pretty versatile accessory. Here are a few examples. 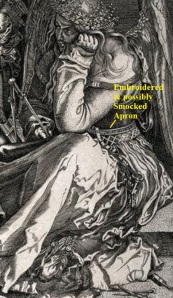 Now to figure out the how, and hopefully later tonight I’ll start the pleating.

Translate To A Different Language

My Posts by Date

Tags in My Posts

My Most Recent Posts

An accounting of the medieval journey of the de Huntington family.

Turning Over a New Leaf

I have created this blog to share my interest in all forms of stitching, quilting, sewing, knitting, medieval re-enactment and costume making - particularly my love of historical embroidery. I also love travelling,especially when it also involves any of my other interests.

My documentation and research of sewing projects and historical garb creations

Society for Creative Anachronism Every Day of Your Life!

It's All About The Dresses!

Even if it's just sew-sew.

meanderings through the 15th century

all my needle and thread projects